Cholesterol-lowering foods include a combination of garlic and lemon. We discover the study that demonstrates its benefits. Nutrition is an essential ally against high cholesterol. And among foods that lower cholesterol, are traditionally included garlic and lemon.

In particular, on the web, there is a recipe for a preparation that would help lower cholesterol thanks to garlic. And lemon. The instructions to prepare it are precise and detailed. As well as the subsequent method of recruitment; but are we sure that these are really foods that lower cholesterol. And that by combining them you can get results?

Let’s start with a fundamental principle: in some cases to lower high cholesterol it is necessary to take drugs, instead of in the case of borderline cholesterol, following the doctor’s advice, food supplements could also be taken. Even for those who take drugs. Or dietary supplements, it remains essential to control nutrition – which does not mean simply taking cholesterol-lowering foods. But following a diet that limits their increase (so that it bans, first of all, excesses of saturated fat).

However, cholesterol-lowering foods do exist. Examples are those containing plant phytosterols or fermented red rice. However, their effectiveness can vary from case to case and. Above all, their consumption must be inserted inside a diet suitable, once again, to keep cholesterol levels in the blood under control. Even in the case of garlic and lemon, the anti-cholesterol efficacy may vary according to the cases. 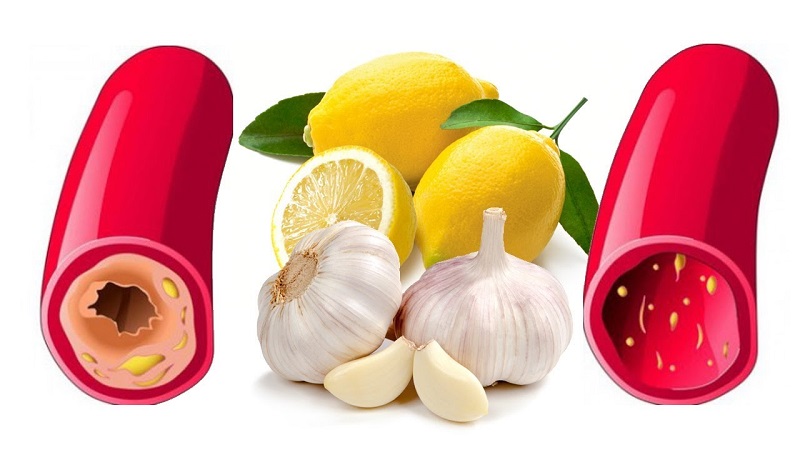 This is supported by the authors of the first scientific study * which evaluated the combined efficacy of garlic. And lemon as cholesterol-lowering foods. Several researches had evaluated the cardiovascular health benefits of garlic and lemon taken separately; in this study, however, both the effects of the combined intake and those of the separate intake of garlic and lemon were evaluated.

The experiment lasted 8 weeks. All participants (aged between 30 and 60) had levels of total cholesterol and “bad” cholesterol above alarm levels; 30 have taken garlic and lemon (respectively 20 grams and 1 tablespoon of juice per day), 30 only garlic, 30 only lemon and 30 neither garlic nor lemon. The blood tests conducted before the start of the experiment and at the end of the 8 weeks revealed that

garlic alone reduces both total and “bad” cholesterol, lemon no.

How to take garlic and lemon

To make the most of the benefits of garlic and lemon it is possible to make a drink, to consume one glass a day on an empty stomach. To make it, you will need four organic lemons, four garlic heads, small ginger root and two liters of water. The combination of water and lemon neutralizes the strong smell of garlic.

After having washed the lemons and cut into pieces without peeling them, add them to the ginger and garlic and blend them until you obtain a homogeneous mixture. In a saucepan, add two liters of water and the mixture of garlic, lemon, and ginger and bring to the boil, stirring. Allow to cool, strain with a sieve and pour into a bottle.

Cooking in the time of the coronavirus: here are some recipes to do in quarantine.