Once you have had a beautiful carpet fitted you probably don’t really think much more about it, until perhaps you have to call Cheltenham Carpet Cleaning company https://www.clean-able.co.uk/commercial-carpet-cleaning-cheltenham/ because someone has spilt red wine all over it. But carpets have a long long history and it is thought that they were first developed in Central Asia thousands and thousands of years ago. 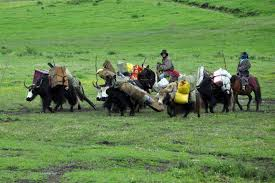 These carpets were created in the size and style of what we know call rugs. Nomadic individuals needed a way to keep themselves warm in the colder months and initially animal hide was used but this was problematic to handle and move around. Instead they started to other materials from sheep and goats and create tent items using warp, weft and pile. These were created on very basic looms that were made from wooden ribs that were secured to the ground. The warp was then fastened and the looming for their early style rugs could take place. The patterns that were woven tended to be of geometric or curved shapes.

During the 16th Century in both Persia and India te technology and artistic design of carpets was enhanced and further developed. Workshops in the courts would take place where individuals would be taught the skills need to create elaborate carpets. One of the most famous carpets in the world, known as the Ardabil carpet was created during this time period and you can see this in the V&A Museum in London. It is thought to date back to 1539 AD and was ordered by Shah Tahmasp as a carpet to be laid in the sheikh Safi mosque. It took a total of three years for around five weavers to complete this intricate rug that when finished measured 534 cms wide by 1152 cms long. It is thought that the carpet was probably created in Persia in the city of Kashan. 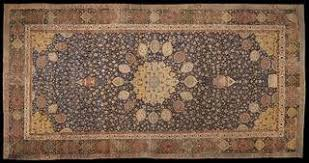 There were originally two identical carpets made but in order to repair one carpet the other was taken apart. These remnants of the second carpet can be seen in the Los Angeles County Museum in America. They were both made with a pile made from wool, warp and wefts made from silk and persian knots.

A quick internet search will see you find a number of other key carpets that are often displayed in museums and are testament to the skill and creativity that went into the creation of these early forms of carpet.