The arrival of the electric car has also materialized in MINI. The British firm is committed to electrifying its flagship model, the three-door hatch creating the MINI Electric that hardly changes aesthetically compared to gasoline and diesel models, despite having received a new soul in the form of batteries and an electric motor. We have already driven it and these are our first impressions.

When the BMW Group bought the MINI brand and brought it back to life back in 2001, the three-door MINI hatch, this urban version, at less than 4 meters long, was the embryo of the brand. Who does not remember those first modern MINIs with the red and white decoration or those by then new vinyl ceilings of the Union Jack. Keep reading types of engineering.

Over the years the MINI range has been diversifying, with models such as the Clubman with its characteristic family body, the successful Countryman compact SUV or the Cabrios, also based on the hatch body. There was even space for MINI Coupe and Roadster, although these did not finish curdling and ended their commercial life soon.

Looking at the current MINI range, I am not surprised that they have chosen the smallest of all to make their first electric car. It fits with the current moment we live in our market where insufficient road charging infrastructure limits the use of electric cars to mainly urban areas, with few exceptions.

An electric MINI Countryman with about 400 kilometers of autonomy, similar to that of the Hyundai Kona EV or the KIA eNIRO, would still not serve to make a trip between Madrid and Vigo, to mention the road trip that I make on a more regular basis, and due to size and weight, it would be inefficient. 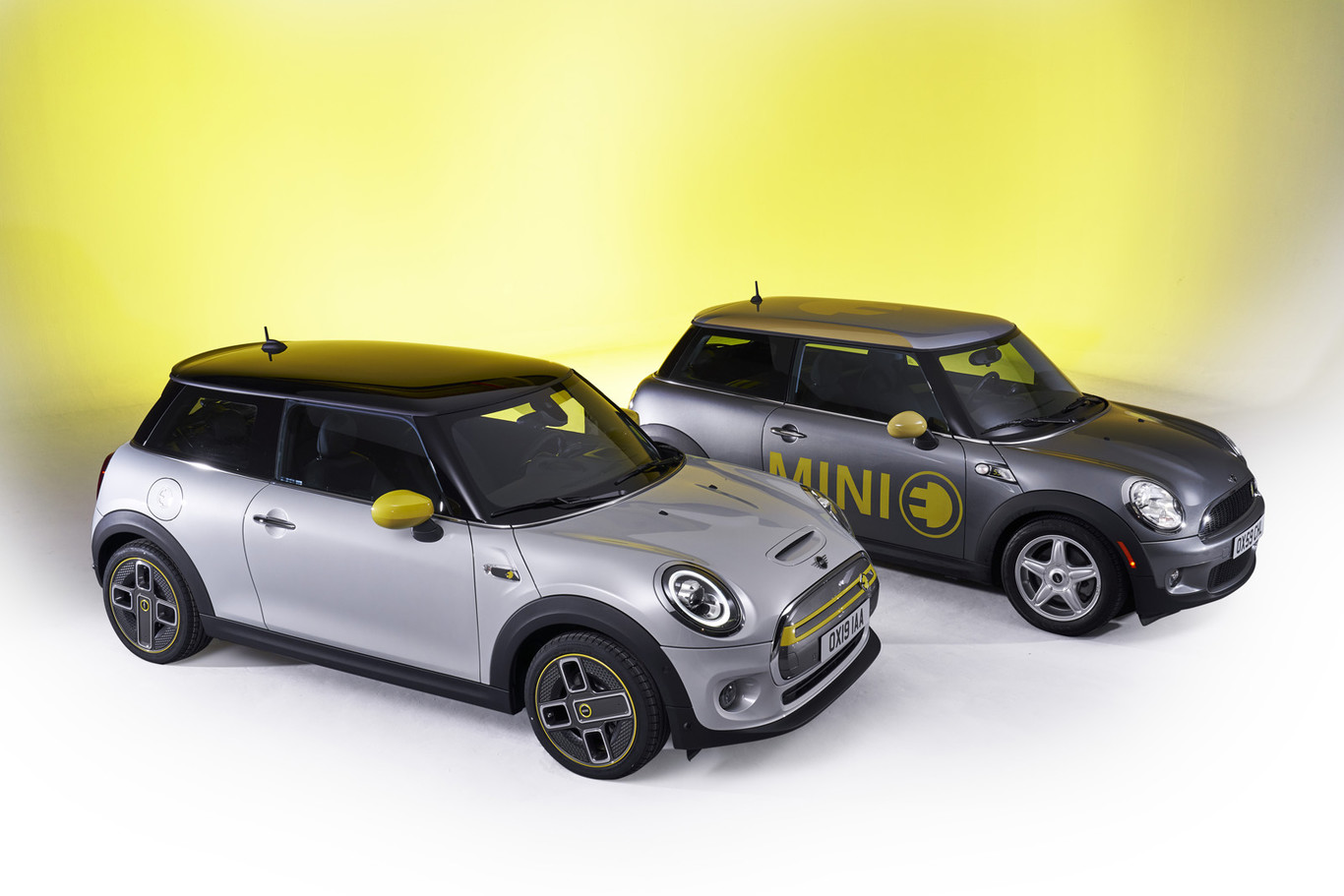 Thus, at MINI they have taken a proven model of success that they had already developed and have adapted it to their new life as an electric car, thus avoiding part of the unnecessary risks associated with the million-dollar investment that other brands do have to take to get into the world of the electric car.

The MINI Electric is 3.84 meters long, like a conventional MINI, it is the same width (1.72 m.) And the same height (1.43 m.). What does improve now is the ground clearance, 18 millimeters higher despite the fact that, also due to the batteries, the center of gravity is 30 millimeters lower than that of a Cooper S.

A whim, but electric

The technical designation of the model is MINI Cooper SE but popularly and in advertising they will call it MINI Electric. Marketing stuff.

Make no mistake, from the beginning the MINI hatch has been a car in which most of the purchase decisions responded more to impulses of the heart than to reason, especially in the initial two generations and in the Cooper sporty versions S and John Cooper Works.

Its small boot, little habitability especially in the rear seats or its Premium price, high compared to other options of similar size, were supplied with a design that many people fell in love with and a very marked personality both aesthetically and at the time to drive it. Yes, I mean the Go Kart feeling that they talk about so much and how many followers it has around the world. If you don’t know what I’m talking about, read last year’s Cooper S Cabrio test. 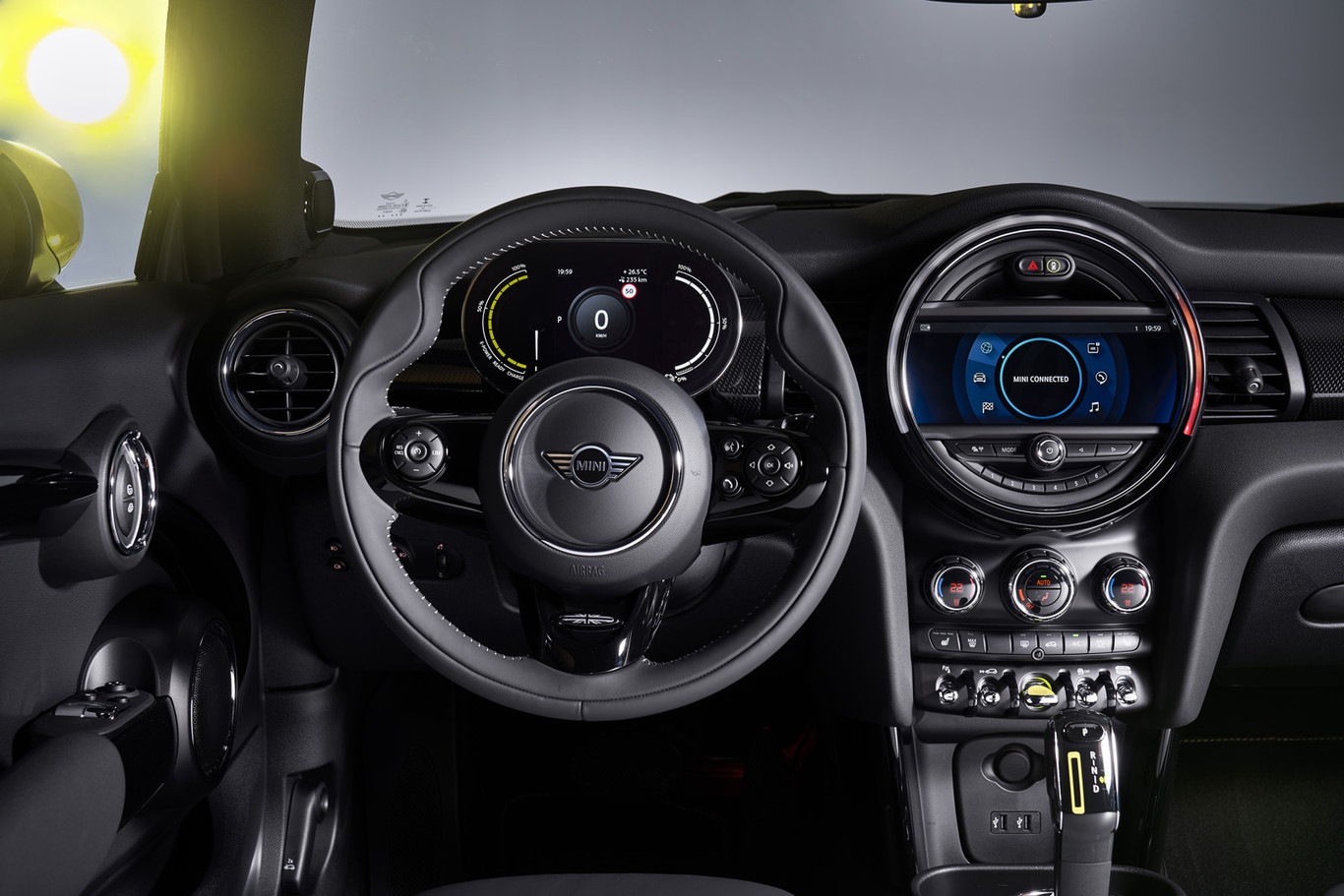 The same happens and will happen with this electric version that we are dealing with today. It will not be the electric car with the most habitability, nor the cheapest, it will simply be the electric MINI, a car with a Premium positioning very marked by its design, brand and that after having driven it, I dare to anticipate that it will continue to conquer many customers now in electric version, perhaps the same ones that previously aspired to have a Cooper S.

On a mechanical level, the changes are several. On the one hand, the combustion engine has been removed and in its place, under the hood we now have a 135 kW or 184 hp and 270 Nm electric motor, with a one-gear transmission that sends power to the front axle. It is a figure of power very close to that of a Cooper S with its 192 HP.

On the other hand, the batteries are T-shaped, arranged under the rear seats and between the front ones, without detracting from the habitability of the passenger compartment or the capacity of the boot, but allowing due to their weight to considerably lower the center of gravity compared to the petrol Cooper S, which doesn’t sound bad. It weighs 1365 kilos, 145 kilos more than a Cooper S with automatic transmission in the same body.

These are refrigerated batteries to ensure that they are always in their optimal performance range, which ranges from 25 to 40 degrees. Its 32.6 kWh capacity gives it a range of 234 kilometers. Yes, we are dealing with an electric car for eminently urban use, as the MINI hatch has always proposed, but which also allows getaways beyond the city if we consider that an average driver in Europe does not usually do more than 40 kilometers a day. 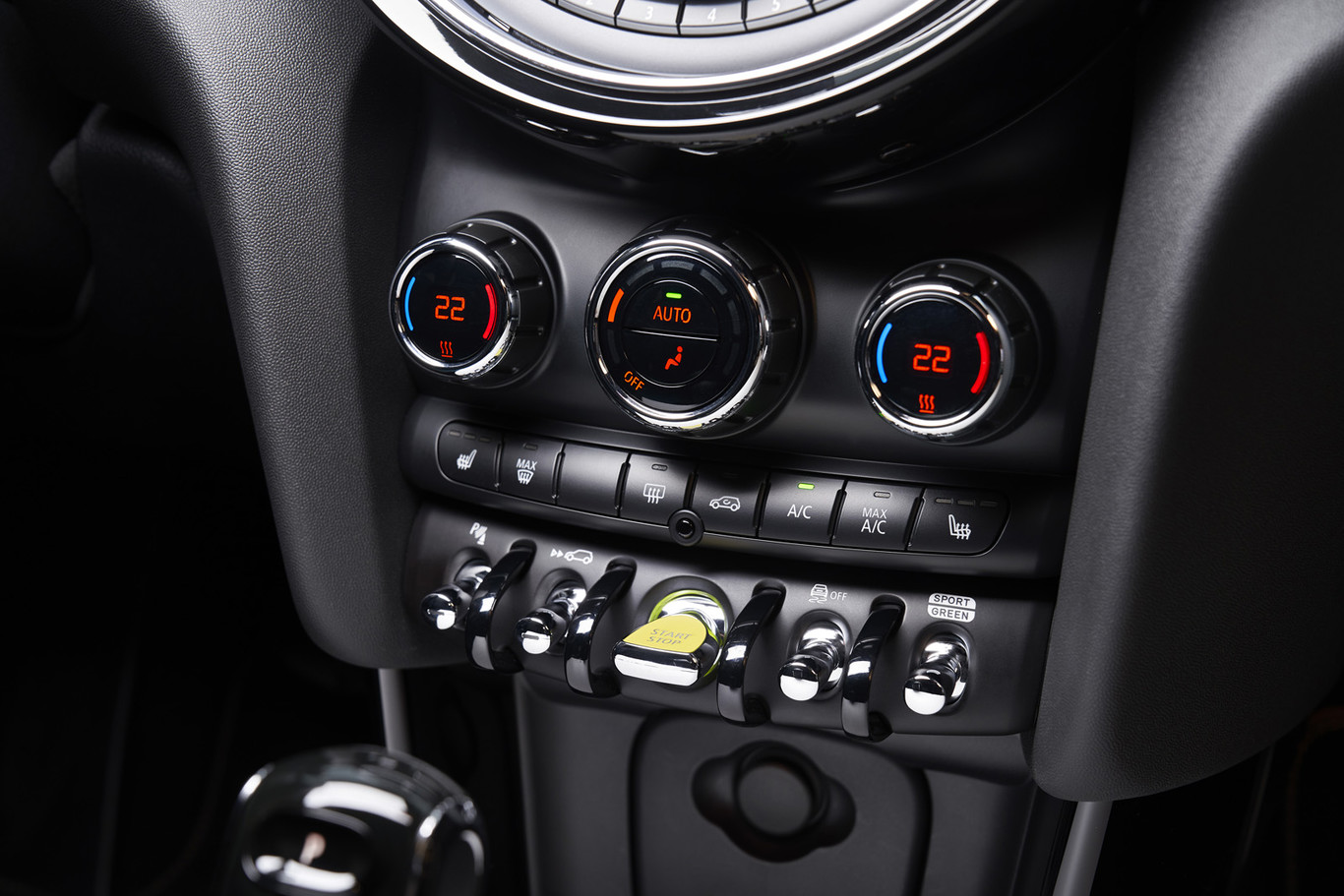 I had wanted to drive the new MINI Electric after having known it in detail in a static way in the month of October last year, when we told you all the technical and aesthetic details and how the range would be segmented into four levels of finishes, S, M, L and XL with their corresponding prices.

We went down to the garage and a huge fleet of MINI Electric was waiting for us, creating a beautiful multi-colored palette that reminds us that although the range has been simplified, it is a car in which there are still enough options to customize with many colors and wheels your MINI, in this case electric, and find one that fits your personality.

We chose a black color in which the details in yellow (optional, standard in gray), such as the line that runs through the closed front grille, the rear-view mirrors with specific shape for this SE, or the insignia that indicate that we are before A MINI plug-in, they stand out more if possible than in other colors.

In addition, the chosen unit carried the striking asymmetric wheels with a yellow profile that are novelty and specific to the MINI Electric. According to what they could tell us in the presentation, these rims with such an eye-catching design have been an engineering exercise, since being asymmetric they require a specific balancing so that they do not vibrate while driving.

And we start the car by pressing the characteristic switch located in the center console. Logically, as it is an electric car, you have to pay attention to the indications on the screens to know if it is already on or not, since the absence of noise is absolute. 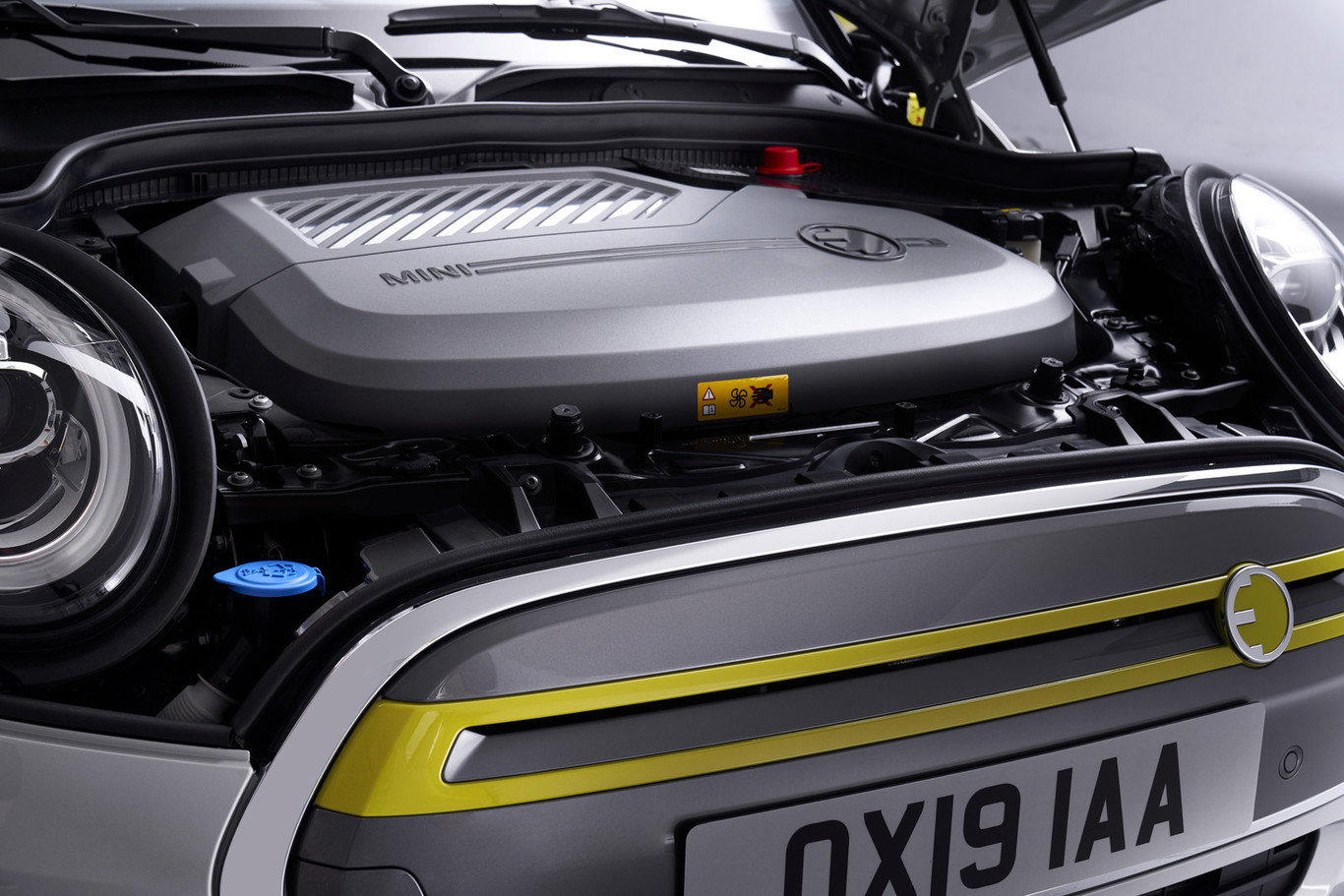 At the wheel of the MINI Electric

Once behind the wheel of the MINI Electric, and moving in urban environments, the first thing that stands out is the smoothness and silence with which it circulates. It is strange to go in a car that looks familiar because I have tried several MINI before and do it without hearing any noise.

And it is that the engine sound has always been one of the most characteristic elements of the MINI, especially in the Cooper S and John Cooper Works versions that used to delight us with backfire, explosions and other symphonies of the double exhaust line in the central position.

Nothing similar happens in this one, in which, of course, there is no room for the exhaust, but what rules is the silence of running. Even the friction of the tires with the asphalt, which is the most common noise in electrics, is very little perceived from the driving position.

We were in Green mode of the four available (Green +, Green, Mid and Sport) and in the program in which the electric motor retains more to regenerate more energy for the batteries. Although the BMW i3 is perceived quite differently from its first cousin, it can be driven using only the accelerator pedal.

It requires a small adaptation on the part of the driver, but once you realize that to stop the car at the next traffic light it will be enough to modulate the intensity of acceleration and take your foot off the right pedal as we get closer to the point detention, everything will be sewing and singing.

One of the novelties in this electric version is the arrival of the Green + mode, the most radical of those intended for efficient driving. In it, the response of the car becomes smoother and takes the autonomy to such an extreme that it even disables the air conditioning and heating in the seats, among other things.

Playing with the other modes, you can see a very marked staggering between all of them. Each one has its own personality and they are very well segmented for the needs of each moment. 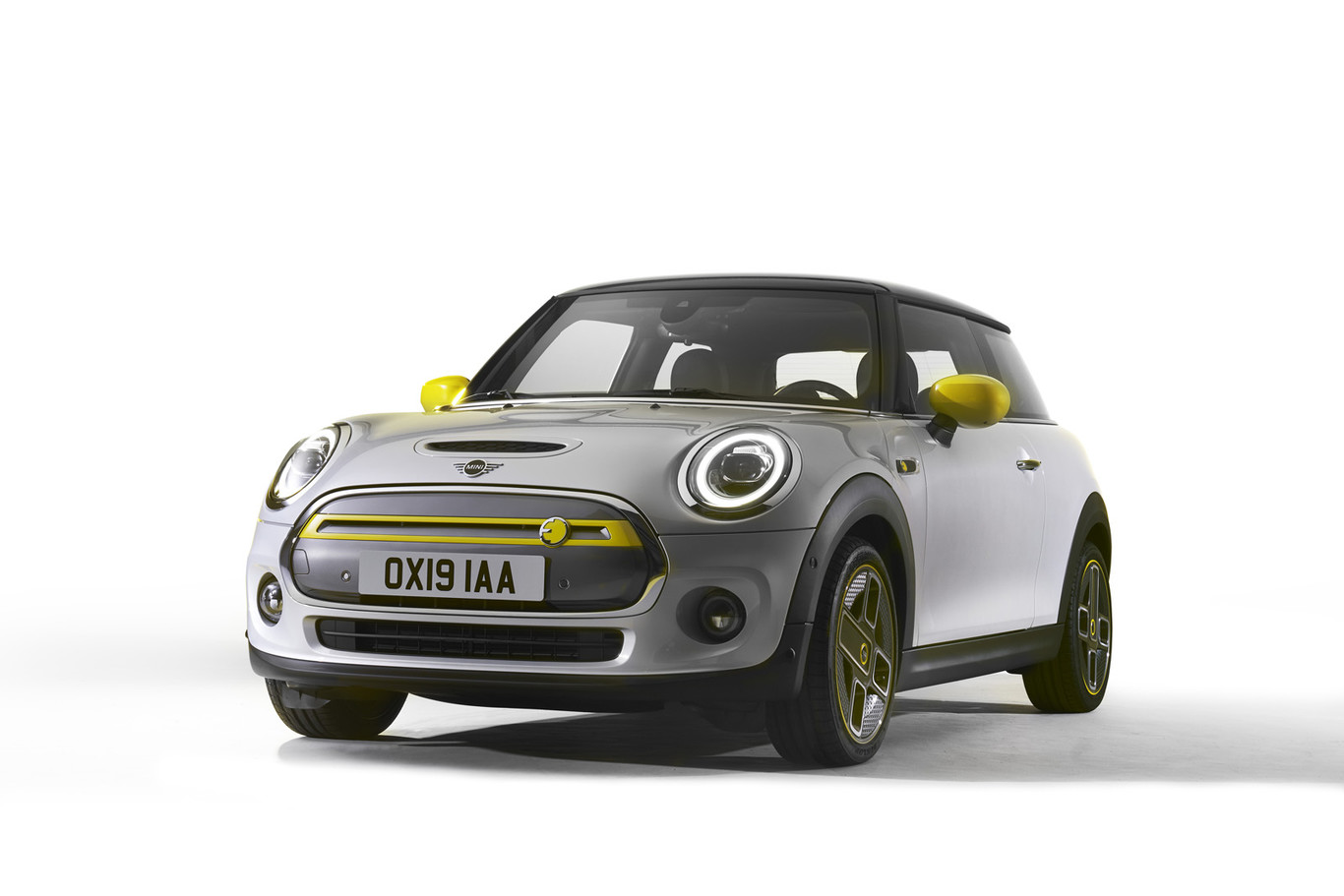 Standing at a traffic light, with the Mid mode activated, we leave with our feet fully as soon as La Luz is green. The car beats you to the seat with desire, and the traction is perfect without a minimum loss of motor skills. For this, it has a specific DSC stability control that ensures that you can take advantage of that potential without the front wheels skidding and losing efficiency.

We are in the first position leaving the rest of the cars behind, and it is not for less because it accelerates from 0 to 60 km / h in 3.9 seconds. If you want to keep going, you will reach 100 km / h in 7.3 seconds and you will be able to reach 150 km / h, which is where the maximum speed is electronically limited.

Heading out onto a country road on the outskirts of Madrid, we look at the small 5.5-inch oval-shaped digital display behind the wheel. It is read very clearly, showing the power in the left hemisphere, the speed and autonomy in the center and the available battery level in the right hemisphere.

The consumptions it indicates are at 15.6 kWh and they remain quite stable and seem realistic despite the fact that we then started to make curves and selected the Sport Mode. What I like the most, apart from the silence and the immediacy of the throttle movements that give the 270 Nm of torque available from scratch, is that it feels MINI.

The feel of the steering and overall feel fits in with what you expect in a MINI. It is very immediate and reactive to the movements of the steering wheel, it camouflages that overweight quite well and has a very successful weight distribution, with 59% on the front axle and 41% on the rear.

What is the best way to clean car upholstery?

The modular platforms in the form of skate, key in the new electric cars