Bristol Balloon Fiesta is an event that takes place in Ashton Court each August and has done so for a number of years. It is one of the events that attracts my locals and those from further afield.

The Balloon Fiesta seeing hundred of hot air balloons in all shapes and sizes taking off from the Ashton Court location and the incredibly popular night glow events where the balloon fires are lit and a fireworks display follows shortly behind this. If you have never visited the event before you should take a look at some of these related facts and add it to your to do list for this summer.

The annual balloon festival was actually the idea of the well-known balloonist Don Cameron, who also founded the company Cameron Balloons. It was an idea that occured during drinks with his friends in a pub in the Clifton area of the town. The event started off on a small scale and over the years has worked its way up to the International status that it now has. It is Europe’s biggest balloon festival and each year it gains more and more visitors.

The popularity of the event is such that the Clifton Suspension Bridge is closed during the night glow event as if the bridge exceeds more than the 200 pedestrians that it can comfortable take, structural damage can occur. 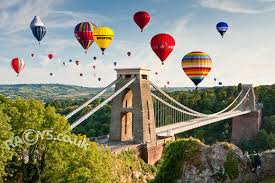 Hot air balloons can take around six weeks to make and it is thought that of the 150 or so balloons that appear each year at the fiesta around 100 of these are made by Cameron Balloons. Interestingly, you would think that holding an event like this in the UK, with its changeable weather was a bit of a risk. But hot air balloons can in fact be flown in rain. The only issue that occurs is that rain can find its way into the balloon and as a result the pilot in the basket below can be subjected to an unexpected warm shower!

This year plans to be another exciting event, with many people already thinking about what special shaped balloons they may get to see.