Dentistry has a long and not so pleasant history in the UK but thankfully the science has come a long way and the experience now can almost be a comfortable one. Dentists try very hard to put the patient at ease, new treatments are quieter and less invasive and sedation is even offered for those who are extremely nervous. A Dental Implants Cardiff company such as https://cathedraldentalclinic.com/dental-implant-cardiff-2/ can deal with some of the more complex denistry issues such as implants with relative ease and can give people the Hollywood smile that they dream of.

Spare a thought for our ancestors for whom a bad toothache could have literally meant live or death. For hundreds of years, people who called themselves dentists but were merely amateurs with little medical training, would run back street dental operations and often leave their patients in agony. Until the 1850’s, the only real solution to almost all dental problems was extraction. It is no wonder that fear is so often felt at the thought of a trip to the dentist when in the past tens of thousands of people died due to poor treatment, complications and infection. 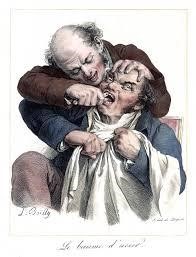 This is all fairly recent in our social history and might explain why there are such high numbers of people afraid of the dentist’s chair. Before the 19th century, dentists clinics were viewed as places of torture with barbaric instruments and almost no pain relief or after care. Thank goodness we’ve come a long way since then.

Before the 19th century, dentists didn’t exist as a formally trained profession. Before this people put their faith in barbers or blacksmiths who acted as surgeons. Can you imagine how awful this must have been? They would use pliers for pulling teeth or tools that resembled bottle openers! Travelling back even further into history, it has been estimated that in 1665, the year of the Great Plague, one in ten other deaths in London were linked to dental problems. Many weird but not wonderful cures were sold as fraudsters seized on this plentiful problem.

Early dentistry began with John Hunter in 1771 who wrote a book called Natural History of The Human Teeth. For the first time, a scientific approach was fostered and he gave names to all the teeth which we still use today. He drew very detailed diagrams which were used in teaching and proposed regular brushing and good diet.

Drills were introduced in the Victorian era and they were slow but at least they helped provide an alternative to extraction. Cocaine used to injected into the jaw with huge needles but was deemed safer than chloroform. The early treatments were still prohibitively expensive though and many people still chose to have their teeth pulled to spare them a life of pain.

With the advent of the NHS in 1948, dental care became affordable for the first time ever and queues would form outside surgeries. In the first nine months of the NHS being in existence, four million cavities were filled! The addition of fluoride in our water and toothpastes has also helped to improve oral health and treatments have improved drastically. These days the focus is on pain-free dentistry in comfortable surroundings.

Women's sportswear: How to choose the best sports outfits?

The benefits of aerobic exercise